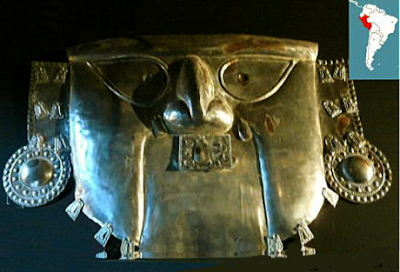 The deepest mystery of the Sicán culture is the identity of a man, with beak-shaped nose and OJOS ALADOS (winged or almond-shaped eyes), who is depicted everywhere on Sicán masks, ceramics, and images. Like the Chimu's mythical Takaynamo who landed at Huanchaco, the Sicán culture has a well-recorded legend of a mythical king who arrived by sea around 750 A.D with a wife and full royal court. This king, named Naymlap, founded a temple and installed and idol known as Yampallec- the origin of the name Lambayeque. Upon his death , the relatives of Naymlap spread the rumor that the kind grew wings and flew away, leaving his son to rule.
The dynasty founded by Naymlap included 12 kings, according to historical evidence.
According to legend, the last Naymlap king, Fempellec, committed a series of sins that caused a devastating flood and a period of crisis for the Sican people. This is certainly possible: nearly 1.5 meters of water coursed through Batan Grande during El Niño floods and a similar event might have caused Sican to abandon and burn the city  in 1050 A.D.
The Sican then moved their capital to Tucume, where even larger pyramids were built.
Posted by Unknown at 6:42 PM No comments:

Over the Andes by Train 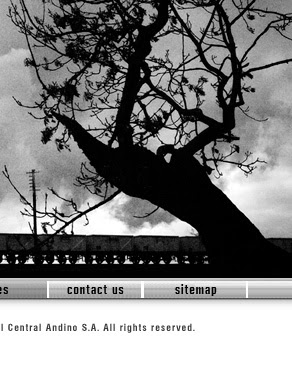 One of Latin America's great engineering achievements of the 19th century was the completion of a train line across the Andes between Lima and Huancayo.
The 12-hour journey begins in the desert coast around Lima and climbs through a subtropical river valley, dozens of rock tunnels, onto the puna, and finally up and over the snow-covered Cordillera. Needless to say, the 12-hour ride is a memorable experience.
The train was built between 1870 and 1908 and was the brainchild of American entrepreneur Henry Meiggs, who bragged that he could "get a train wherever a llama can walk". Polish engineer Ernest Malinowski designed most of the 61 bridges, 65 tunnels, and 21 switchbacks, built over four decades by 10,000 workers - more than half of whom were indentured workers, or coolies, from China.
The train, considered to serve the highest passenger station in the world, climbs nearly nine meters per minute until reaching Ticlio at 4,758 meters. Shortly afterwards it climbs to its highest point La Galera, a tunnel through the Andes at 4,781 meters.

While adusting to a higher altitude, it is always a good idea to avoid alcohol, heavy foods, and physical exertion. As the Bolivians say, COME POCO, TOME POCO Y DUERMA SOLO:)
(Eat little, drink little and sleep alone")  :)
Posted by Unknown at 5:18 PM No comments:

Arequipa and the Colca Valley

Posted by Unknown at 8:53 PM No comments:

Women wear a white or red blouse or bayeta, made of sheep wool, a black shawl or chuco over their head, a red waist wrap called chumpi, and a dark-collored pollera, or skirt, that bulges from the waist. Contrary to appearances, they do not have big hips. Taquile women wear three to five polleras at a time-and during festivals, as many as 20!

The men also wear a white shirt with wide sleeves and black pants and vest. But the most distinctive feature of men's dress in the CHUYO, or hat which boys must learn to knit at early age.

The hats vary depending on man's marital status and public authority.
Single men were a "chuyo de soltero" , the "bachelor's hat", with red on the bottom and white on the top.
Married men, on the other hand, wear a solid-red hat with a repeated geometric design of a man and a woman holding hands. 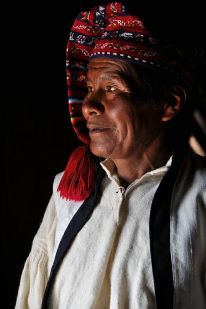 But he most interesting ones are worn by the town elders (varayocs):rainbow-colored with ear flaps!
Posted by Unknown at 9:02 PM No comments: 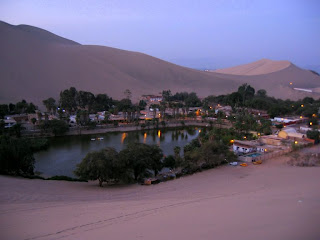 The name Huachina is Quecua: wakay means to cry and china means young woman. According lo a local legend, a young women and her lover strolled most afternoons in the countryside around Ica. But just when the couple was to be married, he dropped dead. The woman was wracked with sorrow and spent the days afterwards wandering through the countryside and retracing her walks with her lover. As she walked, her tears formed a lake. One day she sat by the Lake , and an evil spirint in a man's form tryied to rape her. She jumped into her lake's water, imploring the water Gods to protect her by covering with a cloak of snow. She escaped the man , but she drowned in the Lake.Now , every full moon, she floats over Huacachina Lagoon, cloacked in sparkling white light....
Posted by Unknown at 7:18 PM No comments:

Deep within the shadowy underworld of pleasant Historic Lima, two blocks away from the President’s Palace, there is a place so creepy and macabre that you shouldn’t miss on your next visit.
It’s housed beneath the ghostly Monastery of San Francisco, the colonial church dating back to the 18th Century, where on the surface you’ll find a library of more than 25,000 antiques texts, including the first Spanish dictionary published by the Royal Spanish Academy and a Holy Bible from 1571. But don’t be thrown off by the charming appeal of the monastery, because below rests Lima’s first cemetery.
The Catacombs of Saint Francis were discovered in 1943 and are estimated to contain the remains of 25,000 people, though some experts say the number is closer to 70,000. Once you make your way down to the subterranean level you’ll walk through narrow bone-lined hallways underneath the church where you’ll see several large and deep holes filled with bones and skulls arranged above each other in a circular pattern.
Boneyard
On this extensive tour you can appreciate the vaulted ceiling and semicircular archways tightly shut with brick and limestone so that the smell of the tombs, where coffins were once placed one on top of the other separated only by dirt and limestone, wouldn’t reach the church.
To this day you can distinguish skulls, femurs, tibias, and fibulae of the bodies that were placed within the old church to decompose. 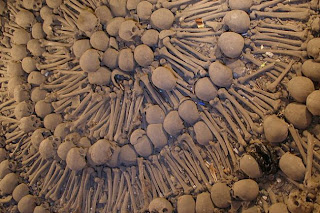 Even before the earthquake of 1656 when the original church collapsed, the catacombs were used to house the bodies of deceased priests and nobles. When the church was rebuilt after the earthquake, the practice of burying individuals within the church continued even after the labyrinth of tombs was completely filled.

Miraculous resident
Church records indicate that some famous Peruvians from the colonial era were buried within the old church.
The remains of Friar Juan Gomez, a 16th Century doctor and “miracle worker,” who worked at the church hospital 40 years is among the thousands buried in San Francisco.
According to the Peruvian historian, Ricardo Palma, one time Friar Gomez saved the life of a man who fell off his horse by simply reciting three prayers for the man. The man, who everyone believed was surely dead, rose to his feet and walked away as if he’d never fallen of the horse.
The people cheered for the friar, “it’s a miracle, it’s a miracle, long live Friar Gomez.”
According to the Franciscan chronicles, in his attempt to flee the attention and applause of the crowd that had gathered, Friar Gomez supposedly flew away to his monastery.
The catacombs are the last stop on the tour of San Francisco. Before reaching the subterranean level you will see the church decorated with ornate woodcarvings, Spanish style mosaics, and faience tiles.
In the monastery there are plenty of religious works of art and you can also visit the choir stalls where you can see the large choir songbooks displayed on floor stands. Before exiting the monastery you will pass through a series of beautiful courtyards full of plants, walkways and private little nooks where it looks like the monks passed their time meditating.
The tour guides are knowledgeable and fluent in English and provide gross, but interesting little facts about the tombs.
The San Francisco Church and Catacombs is an impressive Colonial-style building located near the historical buildings in Lima’s downtown Plaza de Armas
Posted by Unknown at 3:31 PM No comments:

PERU CONNECTION: Q'eswachaka: The last Inca rope bridge in Peru: Every year, the residents of Canas, Cusco meet to repeat a ritual that has lasted for at least 600 years. A thousand people, from four c...
Posted by Unknown at 9:06 PM No comments: